5 Winners of the Week


I hear rumors that this card is spiking based on some fringe combo deck driving a buy out, but I’ve been unable to track down the relevant info. Clue us in via the comments section and we’ll update.

This is a common card in Infect strategies, and there really aren’t that many copies floating around despite the FNM, Anthologies and Time Shifted printings on top of the original. There are two Legends cards on our list this week, which just goes to show what you can expect as more and more MTG players get involved in MTGFinance and start contributing to buy outs on cards with low inventory. Whether you can move the cards into real demand is the pressing question in these cases, so if you want to hold tight on this one you need to feel sure Infect will be alive and kicking for a while in Legacy and Modern. So far all signs say you should be fine holding on to these for a while as a reprint is unlikely anytime soon.

This is a Tiny Leaders spec since Tetsuo is the only URB general available to that fledgling format. He’s also on the Reserved List and highly unlikely to be reprinted due to flavor/brand issues, so holding this guy for a bit isn’t a bad idea, at least until Wizards releases their inevitable Tiny Leaders product in 2017.

These two centerpieces of the mono-blue devotion stratagem are on the rise because, well, Shorecrasher Elemental. 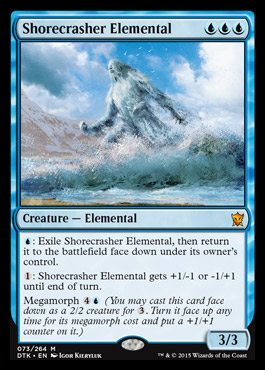 A UUU 3-drop may be just the thing to bring this oppressive archtype back into play as a Tier 1 or 2 option in Standard, and it’s not completely outside the realm of possibility that this card makes the archetype playable in Modern either, now that it has solid 1, 2 and 3 drops to lead into Thassa and/or Master of Waves and make a ton of tokens.  We’ll see how things play out, but I added to my positions in both cards on the basis that a failure to reemerge in Standard doesn’t necessarily count them out in older formats.

I’ve had 40-50 of this card in my portfolio almost since release, on the basis that either Dragons or Eldrazi would eventually make it good. We’re not there yet, but with Battle for Zendikar confirmed for the fall set, we’re not miles out from this card becoming a real thing. The thing is, if it fails to find a home before rotation, it falls back to bulk and you get to hope your copies slow burn their way into success down the road on EDH/Casual demand alone.

3 Top Losers of the Week

Making 3/3 tokens slowly just isn’t where you want to be in Standard right now and the rotation axe is grinding.

The old girl’s had a good run in Standard, and she’s still a viable threat at the top end of several real decks, but her printing in the most recent Duel Deck this month is not going to help her. You should already have outed your copies toward the beginning of the year, and I wouldn’t be caught holding any of this once $35 card for much longer.

Sidisi decks are looking less and less viable as the Standard metagame keeps shifting fast and furious this spring. I’m actually more excited about the undead version of this character once DoT is out, so I think now is a good time to be outing your copies, possibly looking to pick them back up in the mid-summer doldrums when the standard staples take a beating.

My underrated cards from Dragons of Tarkir currently include (full article coming soon):

James Chillcott is the CEO of ShelfLife.net, The Future of Collecting, Senior Partner at Advoca, a designer, adventurer, toy fanatic and an avid Magic player and collector since 1994.

ADVERTISEMENT: Looking for a deck box to match your play style and personality? Look no further! Check out the Grimoire Beta Edition – a spell book looking deck box with stylish cover art that fits you